Put your questions, concerning the issues relating to the A637 road through Flockton, to some of our local leaders at a live Question Time style event at Dewsbury Town Hall on Monday 16 July 2018 as part of National Democracy Week. 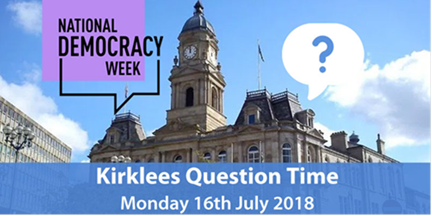 The panel of party leaders will include:

Come along and ask your questions about the things that matter to you and your community.

How to take part

You can book your free place and submit your question online here.

The event is organised by Kirklees Council.

As reported previously, the road through Flockton will be closed from 30 July 2018 for up to 4 weeks, for drainage repairs and improvements. Mike Wood has provided some details of the proposed route, from Kirklees Council. 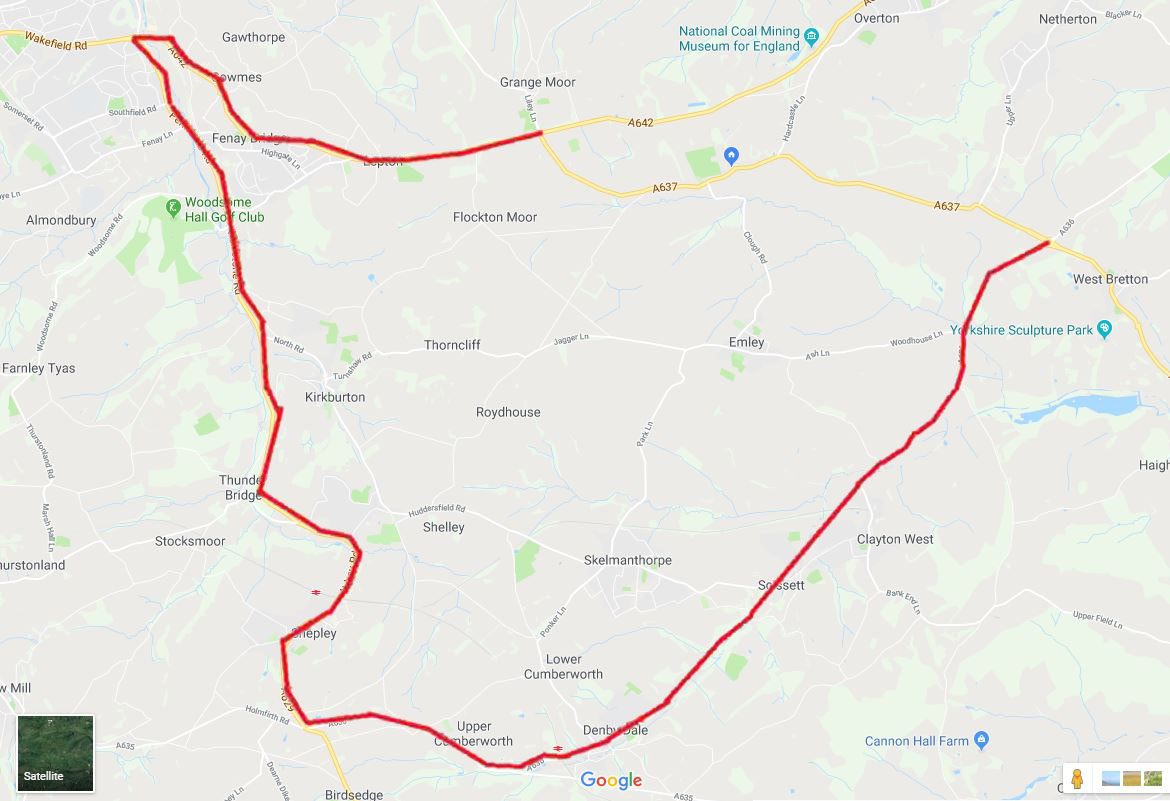 "From the Grange Moor End they [HGVs] should follow their regular diversion. As agreed with Wakefield MDC many years ago, when the one-way system was set up, i.e. Kirklees/Flockton has them going westwards, Horbury/Netherton going eastwards. Ideally, they head towards Wakefield and back out, avoiding Netherton Lane. (But we know which is the shorter).

"Any who usually head for Grange Moor and vicinity, will probably come via Horbury Bridge and to the north of the A637. Those heading towards Huddersfield will, in the main I guess, use this route. Adding about 6 miles and maybe 15 minutes on to their journeys.

"It shows the importance of the A637, lending more weight to the need for a small relief road/bypass avoiding Flockton village. Anyone in the URTU? Or know hauliers? Time for their involvement. It won't be the last time there will be problems here."

The latest from The Huddersfield Daily Examiner (25 June 2018) 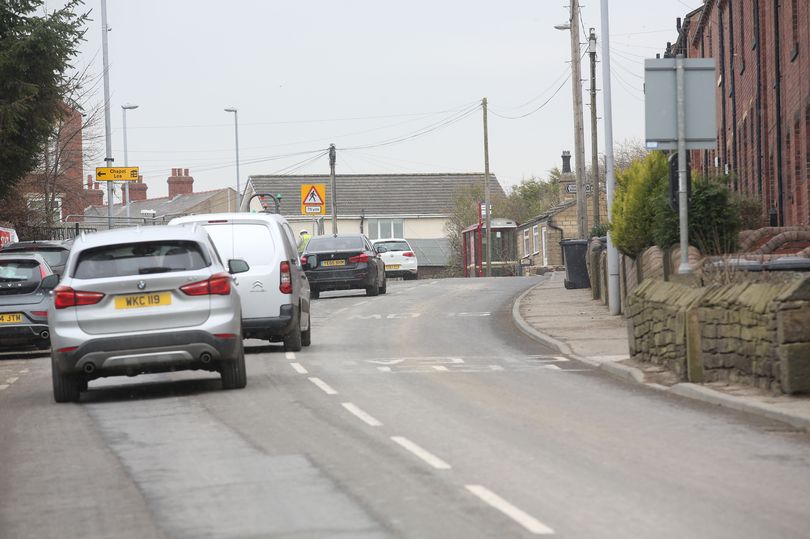 A petition demanding a bypass for Flockton has gained more than 4,000 signatures meaning Kirklees Council will be forced to debate the issue.

Flockton village required at least 3,000 signatures before our bypass request could be debated by Kirklees Council.  On 17 July 2019, we presented 4,007 signatures to Kirklees Council, triggering a debate in the near future. Thanks to all our supporters.  (Read more …)

As previously reported on this Flockton Bypass website, the road through Flockton could be returned to the tranquil backwater it might have become, if all the heavy traffic wasn't passing through… even if it's only for a few weeks. The story has now reached the Press and both the Wakefield Express and The Huddersfield Daily Examiner, carry the news. 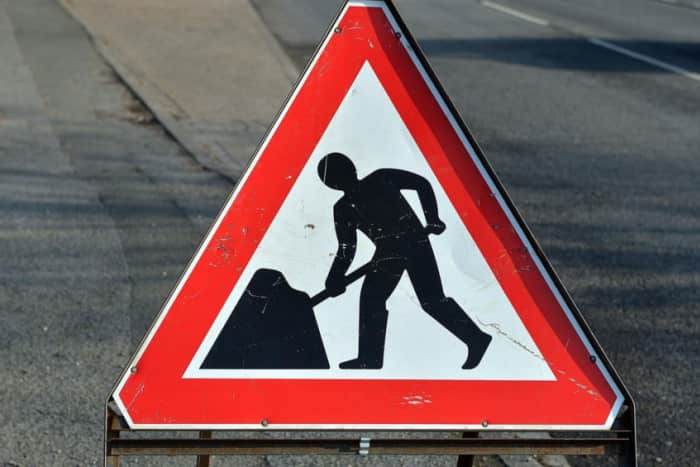 Kirklees Council will shut Barnsley Road, Flockton from Monday, July 30 to carry out the repairs after an investigation showed that the drains were badly cracked and starting to collapse. Read more from the Wakefield Express, here.

And the Huddersfield Daily Examiner:

The road will be closed between Haigh Lane and Doctor Lane. A diversion will be in place directing local traffic past the Black Bull and through Netherton and Horbury Bridge. Read the full Huddersfield Daily Examiner story, here.

Around 40 to 50 people attended the public meeting for an update on the Bypass campaign, held in Flockton Church from 6:30 pm on Friday 15 June 2018. Although the Police and a representative from Highways weren't able to send a representative (they were invited), Paula Sherriff, MP, was able to make it to the first 30 to 40 minutes of the meeting, which ended at about 7:45 pm. Our three local Councillors were also present, presenting cross-party unity in support of a bypass for Flockton. 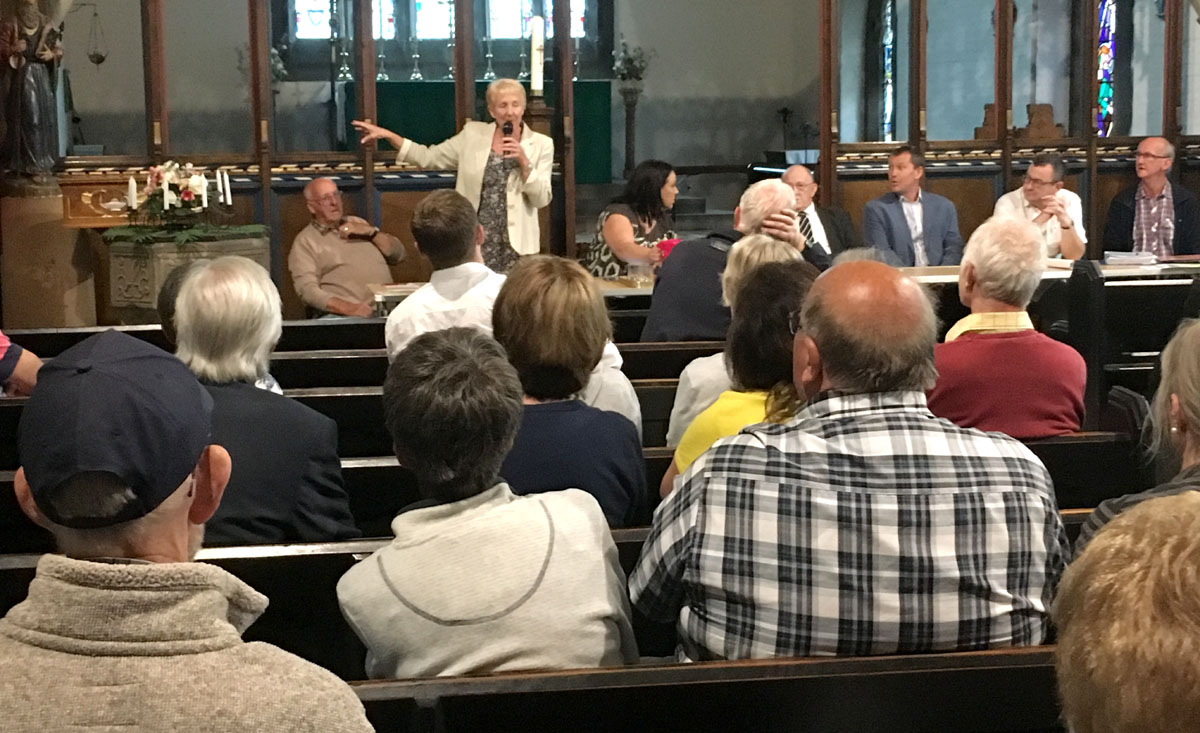 Paula Sherriff met with [Mr] Jesse Norman, MP (Parliamentary Under Secretary of State for the Department for Transport) – whom she described as being "a reasonable man" – on 21 January 2018 to mention Flockton Bypass. On 12 March 2018, a submission was made in respect of the Major Road Consultation. On 30 April 2018, Paula had a further meeting with Jesse Norman. Paula also said that we have to keep nibbling away and persevering. Nothing major will happen overnight as we are well aware. Everyone can play their part by reporting issues etc.

HGVs and Police 'participation'
There have been problems enforcing the no access for HGVs from the Grange Moor end of the village. Basically, the Police are waiting for the TRO (Traffic Regulation Order) to be revised which has, in effect, not allowed them, or the Council, to do what was intended when first introduced in the early 70's. The 4 week closure (see further down this page) will have them undertaking very lengthy diversions! An opportune time to get them backing our campaign, in case of any future issues in the village.

Reporting accidents – no matter how minor
A number of residences have had either near misses with vehicles, or been hit by parts of vehicles. It is important to report all 'issues' or events to the 101 emergency number, so that they can be recorded. This way, the Police will be able to build up a 'map of hot spots'. You can also send details (and any photos) which can be added to this Flockton Bypass website.

A proposed 20 mph speed limit
Cllr John Taylor talked about a village request for a 20 mph limit through the village – the proposed section shown on the map below: 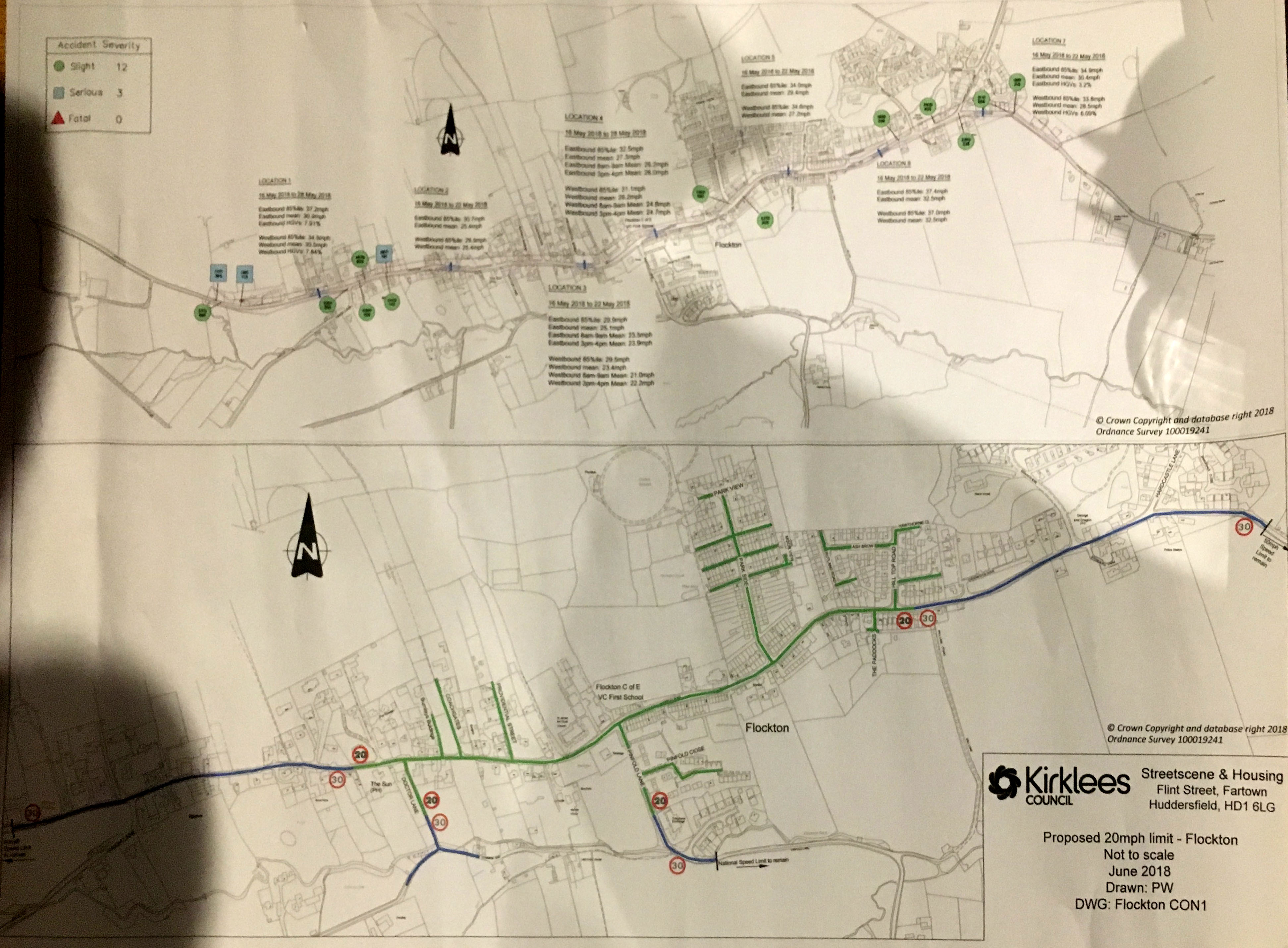 (Apologies for the shadows, but I snatched this photo in the subdued lighting of the Church). If you click on the map, it will enlarge, and if you download it, you should be able to enlarge it further.

It was pointed out that a full stretch of 20 mph through the village wouldn't be possible, as from the Grange Moor side, you couldn't drop a limit from 50 mph down to 20 mph in one go. Similarly, 40 mph down to 20 mph from the other end of the village would have the same issue. Furthermore, a protracted stretch would add to congestion, rather than easing the situation.

Flockton Road Closure
We were informed that the road through Flockton, from the Sun Inn, to Haigh Lane, will be closed for 4 weeks from 30 July 2018. Judging by the audible gasps in the audience, this came as a surprise to most present. The closure is connected to the need to revamp and improve, the sewage system connecting the new builds. During this period, residents will still have access to their homes, but lorries and regular through traffic will be turned around by 24/7 'Gate Keepers' posted at The Black Bull, Midgley and Grange Moor roundabout. (It wasn't made clear, how they were going to turn HGVs around at the Black Bull, whilst also preventing them from driving down through Netherton). Currently, no solution to allow regular buses has been proposed.

In addition to the sewage system, other work will be carried out by utilities and services, at the same time, including new street lighting.

Kirklees have been in contact with Wakefield Council to inform them of the closure as it will impact on roads in their district too. All residents will shortly be receiving a letter re the closure etc we understand.

Although not intended to trivialise this situation, John Taylor suggested that this might be a good time for any residents with road-side property, to undertake any renovations, since applying to encroach on roads or pavements for scaffolding can cost around £3,000.

Feasibility Study
It was widely agreed that a proper professional feasibility study is required for the village. This would take into account everything to do with road suitability, pavements, traffic, economic viabilities, and so on. The only thing preventing such a study from being commissioned, is money!

Cllr John Taylor has now received a response from Highways, following the recent use of traffic recording (count and speed) strips placed throughout Flockton village, from 16 May 2018.

"The detailed response from Highways about my request, supported by Jacqui Gedman, the Chief Executive and my ward Colleagues for an end to end road safety audit of Barnsley Rd and the reason for the recording strips that were across the road. Rather than summaries I have copied below the entire response."

"We have now received the speed counts back that we did before the half term holidays, which have allowed us to better assess the extents of any speed limit changes for the village. The team have also spent some time walking up and down the village to get a feel for where the issues are, and looked at the casualty information for the full length of the current 30mph section.

All of the 7 traffic counters we placed recorded speeds in both directions, over the full week, and from that we know that the slowest speeds through the village were recorded on either approach to the school , and then gets gradually faster as you travel away. Phill will also send the full summary of results next week, but the average speed across all the counts is around 28mph eastbound and 32mph westbound.

The 2 outer counters, one approaching Haigh Lane (from Grange Moor), the other approaching Hardcastle Lane, from the M1, also classified the vehicles travelling over them, and identified their direction of travel.

From this information we know that average of 419 HGV's (7.8% of the overall traffic volume) travelled Westbound* towards the M1 (in 24 hrs), in contravention of the existing weight limit order. Whilst some of those may have been legitimately delivering to the village, it is likely that some are not. We will now be sharing the count information with the Police, so they can target enforcement, once they feel confident that the weight limit order is written in a way that allows them to prosecute without challenge. I know Joe Walker has been in touch with you regarding this.

The team have used all this info to score a scheme to reduce the speed limit through the village, against the Policy and the agreed criteria. They will be contacting you with draft proposals for a 20mph speed limit next week, along with the full count summary for each site.

The hope is that you and your ward colleagues will be able to sense check the limits of the proposed 20mph limit, and then advise on the best methods of consultation with the village residents.

The 20mph limit will be supported by a refresh of all the lining, 20mph repeater signs, both on sign posts, but also in roundels on the carriageway, and features on the ground, on approach to the new 20 limit, to slow traffic down.

The Road Safety team will also be contacting the school this month to discuss working with them on a competition to design some road signs to go at the entrance to the 20mph limit, and also on what additional education and training we can do with them, including refreshing their travel plan, and what we can do to help encourage more of their children to walk to school.

If we start the ball rolling with them now, then they have time to plan time for the sign designs to be worked on when the children return to school after the summer.

John concludes by saying: "Clearly there is a lot to do and with my ward Colleagues we will work with you on the detail regarding this. As I say, this is hot news, from an email I just received and hopefully we can flesh this out a little at the public meeting [held in the Church, on Friday 15 June at 6:30 pm] and I will share more on here as and when I get more detail."

Paula Sherriff MP will be present, plus Councillors. Also expected, will be the Police and representatives from Highways. We will be giving you updates on the efforts so far and what is in the pipeline. 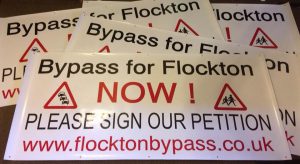 Please spread the word – Thank you