In addition to Flockton's campaign for a bypass, some other local roads and communities are also being looked at – either campaigned for by local residents, or planned by local government.

"I receive a Transport for the North update e-mail quite regularly and this was linked to one I got today. Not sure which pot of money this comes from as there is nothing about any local roads mentioned. Perhaps this is where they should have been applying to, or perhaps they did(?) The one that didn't have much thought put into it." – David Rawling

A £4.9m relief road announced for the centre of Holmfirth has been dropped by Kirklees Council – just four months after it was announced.

The project, which involved the demolition of the Market Hall and the creation of a new bridge across the River Holme linking Hollowgate with the A6024, proved to be overwhelmingly unpopular with residents. (Read full article)

Bypass plan for A635 in South Yorkshire 'could finally become reality'

Well, I know it's not West Yorkshire, but it's still a road that's causing concern for its locals.

"A bypass to ease congestion on the A635 in South Yorkshire has moved a step closer to reality after winning the backing of Sheffield City Region Mayor Dan Jarvis.

"City Region transport experts are now working with officials at Doncaster and Barnsley councils to draw up a strategic outline business case for a bypass that would take traffic away from the villages of Hickleton and Marr." (Read more…)

New speed warning signs to be installed on Otley roads

The Town Council's Community Development Committee agreed this week to fund the purchase and installation of three of the SIDs for a total of £9,330. Two will be based on the A659 Pool Road and the A660 Leeds Road, while the location for the third is still being finalised.

Leeds City Council, meanwhile, is due to install a SID on Weston Lane – before Ashfield Primary School as you enter Otley – as part of the Ashfield Ward 20mph zone project.

Seven ways traffic in Huddersfield is being tackled in 2019

There's not much to be happy about driving around Huddersfield's increasingly jammed up and pothole riddled roads.

With public transport expensive and unreliable, congestion is on the rise as people continue to stick with the good old motor car to get around.

But with traffic queues costing the economy millions and causing worrying levels of pollution and misery, transport chiefs are under pressure to get our vehicles moving again.

After years of putting in restrictions to make traffic slow down highways are being opened up to allow traffic to speed up.

Kirklees Council has been limited to what it can do in recent years due to unprecedented cuts to its funding by government. (Read more…) 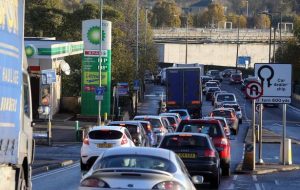 Houses and businesses on the route of a proposed £70m relief road and viaduct designed to cut congestion at Cooper Bridge will be "blighted" until the plan is signed off, says a senior Tory.

Now Labour-run Kirklees Council has been urged to simplify the three options that make up its indicative plans as residents affected by the project take part in a consultation exercise.

Mirfield councillor Martyn Bolt says the scheme, due to get underway in 2021, will be "one of the biggest engineering projects for a generation and needs to be done right".

But with three options on the table he fears that home-owners, commuters and motorists will be bamboozled by the sheer weight of detail on offer.

A massive £69.2m road scheme designed to solve 20 years of congestion around the Cooper Bridge roundabout has been unveiled by Kirklees Council.

Transport chiefs and planners say the "ambitious and transformational" project will involve the creation of a new relief road and viaduct for the area.

The scheme in total will provide 1.5km of new road and changes to 2.5km of current highway.

ExaminerLive 16 November 2018
Kirklees Council to spend £420 million on new roads in next 15 years.

Massive building programmes, including the mooted North Kirklees Orbital Road, represent a £420m investment in Kirklees' highways over the next 15 years. (Read more…)

"Chris Grayling told a group of local businesspeople that schemes to improve the secondary road network were his focus, with the Shipley bypass a priority."