Safety concerns for villagers continue to be raised on both the Flockton Bypass and Flockton Community, facebook groups.

"This afternoon a car overtook another car travelling slowly through the village by Pinfold lane coming up the hill. I was travelling down the hill towards Pinfold lane and had driven around the first parked car across from the WMC and was about to drive around the next cars parked there and luckily saw this driver flying up. He was speeding I'd estimate around 50 and was accelerating up the hill.

"There is going to be serious accident in this village whether it be someone speeding, overtaking or trying to get around the cars parked on the road (you cannot see around the van when you're directly behind it)

"Just to point out, the parking that was removed from the side of the road by the club has been replaced further down behind the red terraced houses across from the school so the argument that some have about there being nowhere else for you to park, there is."

"Just been walking my two dogs up club hill opposite the parked cars, and had a camper van mount the pavement behind me travelling at around thirty mph and almost kill me and both dogs. He missed us by around 7 or 8 inches. The fact that this idiot was prepared to do this before give way has left me totally beyond rage! It's only a matter of time before someone is killed on this joke of a road. Unfortunately I did not get his number so can't report driver to the police.

"Also the new 20 mph speed limit is a total waste of time , on my walk through Flockton this morning the average speed is still around 40 mph . I've lived in this village for almost fifty years and the road now is worse than it's ever been."

"I think it's a bit of Russian roulette with the traffic, I drove through yesterday with 4 x 4 and a horse trailer and everyone was at the right speed and didn't force their way through, the previous week I had an horrendous experience with my trailer with lorries going through red lights , cars forcing me to stop as they came charging through etc etc." 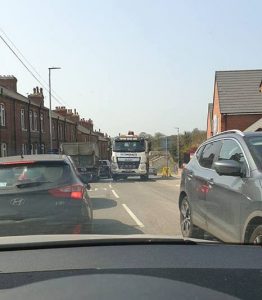 An HGV travelling through the village, eastbound, reportedly lost this from its load, on the morning of Thursday 24 May 2018. 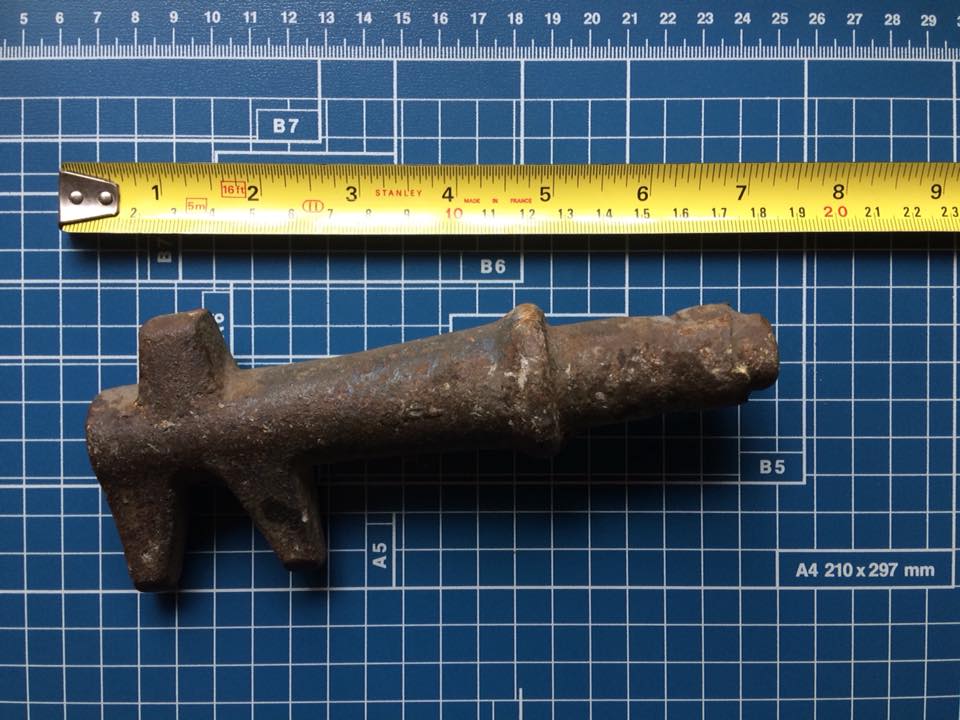 "This large piece of metal came off a wagon as it hit the kerb, swerving in after overtaking my husband while cycling into work this morning. Another one going the wrong way." – Karen M."

A top issue for residents, and particularly those with children and animals, is the proximity of traffic to the narrow, and in several places, poor quality, of pavements throughout the village. 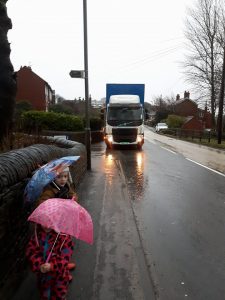 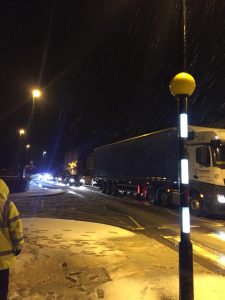 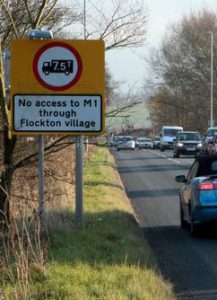 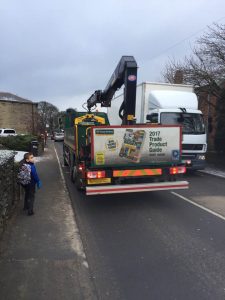 At busy times, when you are not near enough to a zebra crossing, it's very difficult to get across the road – particularly if you are a child. And why would you want to cross away from the zebra? Because often the route to the zebra, from houses on the other side of the road, is either blocked where pavement is too narrow to navigate safely, or it is non-existent.

In a world geared up to the needs of expanding commerce and industry, it sometimes feels that the enforcement of the traffic laws and regulations, outside of major towns and cities,  is irrelevant.

Village safety call for route to M1 – a Huddersfield Examiner article for 2005.

And it's not just Flockton that has been concerned about traffic volumes and lorries. Here's a Huddersfield Examiner article from 2011:

EMLEY residents look set to lose a fight to ban lorries from their village.

Community volunteers with speed guns strike back at motorists. (BBC news, 8 May 2018)

Although not breaking any traffic laws, due to their direction of travel, these queuing lorries show the scale of HGVs, relative to road width, houses, people, and other road users.